I have treated many people with acupuncture for a sprained ankle. It is one of the most common injuries, regardless of whether it is sporting in origin or just an injury that has occurred as a result of rolling off the edge of a gutter or treading on an odd-shaped or odd-sized object. 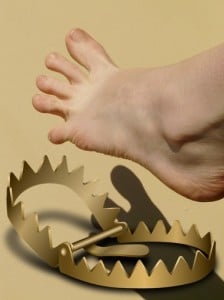 I have provided acupuncture treatment for some extraordinarily severe cases of sprained ankle from elite tennis players in the world to elite Australian Football League players as well as providing acupuncture treatment to elite swimmers for their ankle injuries, resulting from their training on dry land as distinct from their training in the pool. I have also treated everyday people like myself who have incurred the injury as a result of putting their foot down in the wrong way at the wrong time and rolling the ankle to such a degree that it becomes very difficult to maintain normal movement.

The most famous sprained ankle I have had to work on is that of Serena Williams, the World’s Number One tennis player who had a phenomenal year in 2012. I did several acupuncture treatments on Serena early in 2012 when she was in Brisbane competing in the Women’s International Tennis Tournament here. I believe she was very happy with the treatment, having expressed a desire to study acupuncture after her tennis career had finished. I don’t know whether this was tongue-in-cheek but it was certainly nice to hear.

Without question, the results I have experienced over thirty years of practice using this acupuncture treatment for sprained ankles have been quite extraordinary. I have found acupuncture to be one of the most successful treatments for this particular ailment, it is extraordinary.

One instance that comes to mind relates to many years ago when I was working with a Rugby League team and we were going into a semi-final, it was a must-win game. One of the players, a forward who was a second rower, came to me on the Thursday night before we played on the Sunday. He had been playing touch football and had sprained his ankle terribly. Fortunately, he came to me straight away after incurring the injury which was a big plus. To be able to use acupuncture for a sprained ankle in the first hour after an injury has occurred, in my experience, really accelerates recovery for the injury.

This was a very heavy duty sprained ankle. In normal circumstances, I doubt very much we would have got him onto the playing field, but this was a must-win game to get into the grand final for a whole season’s work. He didn’t dare front up to the coach and say that he sprained his ankle playing touch football three days before this very important game. So we worked actually twice a day – we worked on the Thursday night, twice on the Friday, twice on the Saturday and then again on the Sunday morning before the game.

I am delighted to report that he actually completed the entire game. We had his sprained ankle strapped up securely certainly, but without that type of acupuncture treatment, I doubt that he would have been able to make it onto the paddock.

There have been several instances where I have treated people with similar conditions or similar severity of injury where recovery has been aided and abetted by the application of traditional Japanese acupuncture for the sprained ankle.

Watch Alan talk on video about his experience – HERE!