In a recent forum discussion on alternative health someone asked, “Can you use acupuncture for anger release?” I will answer this question here and also explain how Japanese Acupuncture works to release anger.

From a traditional acupuncture perspective, anger is an explosion of energy like a volcano. For some people the volcano erupts really quickly. For others it takes quite a time but when the volcano does erupt, it is a massive eruption. 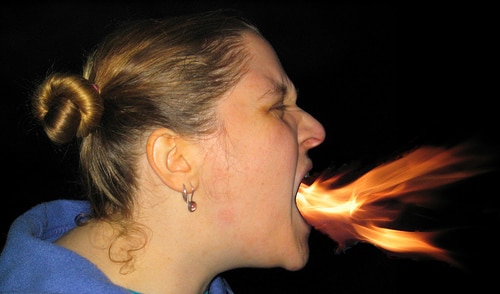 From that perspective anger is a natural response – it is not an unnatural response unless, of course, it causes pain and suffering to others or oneself. The continued indulging in the release of anger can cause a very deleterious or erosive action in the body whereby the individual can run themselves quite dry of energy and leave themselves quite vulnerable.

From a traditional acupuncture perspective it is not just about releasing the anger – it’s about addressing the fundamental cause of the anger. If we harken back to the Yin and Yang principle, we will see that the Yin is the cooling element, calming, restful, gentle, feminine principle while the Yang is the boisterous, extravert, dynamic, active and the day principle.

From this perspective then, anger is the diminishing of the Yin – the cooling, nutrient, restive principle – and an excessive amount of the Yang – the active, vital, vitriolic or expressive energy that results from there being insufficient coolant.

The Yin energy is like the parent supervising the child and the Yang is like the energetic child. When they are in balance, they operate as a very functional unit and they are able to negotiate life constructively within the human context.

A really good example is a child – they are emotive very quickly. They cry very quickly, they get angry very quickly and they are happy very quickly. This is a result of their high energetic potential which is more Yang energy and little Yin energy in a very small body. So there is a lot more emotive, vital energy than restrictive energy.

As we get older then, the Yang vital energy that was so prominent as a child diminishes and the Yin cooling energy starts to dominate. So we have less vital energy and we are more constricted by our bodily structures.

Yes acupuncture can help to release anger but more like in a pressure valve situation that allows release in a controlled manner so that it does not cause distress to the individual harbouring the anger or others that might suffer from their angry outbursts.

Very importantly again, as in all aspects of traditional acupuncture, we’re looking at balancing the night and the day, the Yin and the Yang. So if the Yin is balanced then the expression of the Yang energy is more purposeful and constructive and hence less destructive.

Thus acupuncture works for anger release by re-balancing the body through its cooling/heating functions expressed in the Yin and Yang principles.